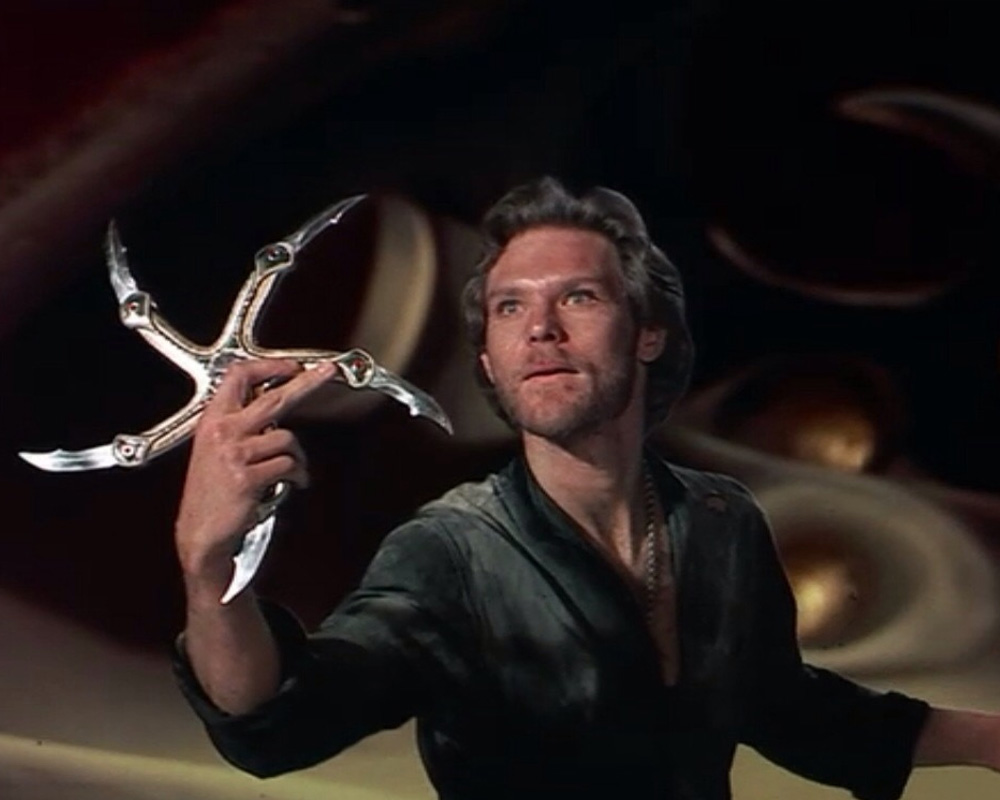 Upon the recent news that the Russo Brothers of Avengers: Infinity War/End Game and arguably the best action movie ever made, Captain America: Winter Soldier, were interested in directing a remake of Krull, someone commented that they shouldn’t proceed with said particular endeavor and that they should take a lesson from the attempts at remaking Red Dawn, Point Break, Total Recall, etc. because as they continued on to say…

“While I love all of the originals, objectively they were not great films.”

Just the other day I made a reference to the “Battle of Winterfell” episode of Game of Thrones and finished it by shouting “Wolverines!” just like in Red Dawn.

And excuse me, there is an actual entire musical devoted to the Greek Tragedy level struggle between Johnny “I am an FBI AGENT” Utah and Bodhi “100% Pure Adrenaline” Roadhouse.

(And oh yeah, let’s not forget actually the movie Roadhouse.)

And come on son. I dare you to get ya @$$ back to Mars just like in Total Recall. In two weeks no less.

Not great films?  Not great?!?

And well, yeah, I guess, I SUPPOSE they aren’t great objectively. We’re assuming here for the purposes of this piece that “objective” is a stand-in for a subdued, rote, by the numbers logic-based execution of pre-approved beats by any of Syd Field’s books on screenwriting.

But I’m just going to go ahead and say that I reject this notion. And if you disagree then I reject you. Not really because I don’t know you, but who said that something being objectively good has to not only be the goal but also the gold standard?

I’ll tell you who.  Adults.

And here’s a newsflash: Adults are Trash.

You Never Forget Your First Time

Years ago, in the now neon-hued dark ages of 1983 I left an old, single screen fourth run movie theater, having just watched the sci-fi/fantasy film, Krull.

Over the next few months I would return to that same theater multiple times to watch that same movie again and again. I saw a ton of other films there too now that I think about it, including the theatrical release of old school Battlestar Galactica, as well as Superman 3 and a ton of others.  Down the years even I remember they had a Krull video game in the lobby that my friends and I would play, dunking quarters into it with reckless abandon as we tried to do who-knows-what-the-point-of-that-game-was.

As I watched the film and walked out of that theater for the first time, I can remember thinking objectively, Krull was not very good. But so what? Despite its weaknesses in storytelling (which I am only now able to tell you why because I wasn’t really aware of the “rules” at the time) it still fascinated me in ways that to this day I can’t quite put my finger on.  And it’s not just me. It has captured the imaginations of a generation of fools just like me.

So yes, FINE, Krull is absolutely, undeniably, objectively not a great film. Not by a stretch. Not even close. Story wise it is a bit of a mess and little of it from scene to scene makes any kind of logical narrative sense.  (For instance, when our previously solitary and solo adventurers stop to rest in the middle of their journey all of a sudden out of nowhere we jump to a scene where a group of women have arrived, I guess to party on until presumably the break of dawn, only to unceremoniously disappear again in the next scene without explanation or a word.)  But we love it anyway and will fight someone over it.

I think because most of us saw the film when entertainment and escapism was our objective and not some dogmatic insistence that all plot points and character arcs come to a satisfying endpoint that we deem worthy and sufficient, the reward is a lifetime of all the feels.

The adult me can dissect, dismember, critique and analyze anything to death, but youthful me just couldn’t get enough.

As adults we are unimaginative louts who have forgotten every bit of wonderful that we used to be in our youth. We are so committed to manifesting a state of perpetual frustration and pain in fact that we actively crush and self-own our hopes and dreams sitting at ill-fitting desks for 8-10 hours, 5-7 days a week, and look pensively at our phones the rest of the time watching emails rack up in our inboxes alerting us to the impending misery that awaits us during our next tour of 8 to 10 hour misery.

And then (and here is the key I think) masochists that we are, we kind of love it because we then get to turn to our family and friends with a sense of pride saying, “I’m so busy.”  It’s a signal that we’re grown up, with our heads and priorities in the right and correct grown-up place. You go boy and/or girl with that brilliant work ethic. It’s a signal to others that we’re doing it right.

So why would it be any different now, through miserable adult eyes when we sit down to watch content based on the fictional lives and daring do of white-haired dragon lady and her frenemies? In a strange way, we do that self-same signaling to our family, friends, and peer groups when we show such righteous disdain for art that isn’t up to our now more “refined” and “discerning” adult standards.

“Those are two hours I’ll never have back.”

Well guess what Connie. You’re never getting any of it back. Even the stuff you liked. So just keep rolling and move along.

Don’t be a Hypocrite

To me it’s kind of striking when you consider that today Star Wars: The Last Jedi can be guilty of far less offenses than Krull, yet we will equate a less than satisfying development for Luke Skywalker (to be fair, it was already established that he loves blue milk) to something approaching treason.

However instead, Krull is beloved. You are not allowed to question it. You are not allowed to even think otherwise. There are no shouts from the keyboard mountaintop with accusations of “THAT’S NOT GOOD WRITING” when random people come and go with no real motivation to join Krull dude’s quest.  There are is no outrage like when fans unironically call for the heads of the showrunners, the director, the producers and/or studio be displayed on spikes when Brienne of Tarth dared show vulnerability in one scene in one episode of Game of Thrones.

And I get it. We also love the old stuff because of its nostalgia. But for nostalgia to be a thing, we had to have unwavering love for the thing in the first place, no matter how bad we might think it is years later upon reexamining it.  And so it just makes you think.  Have we really become that @$$-hole.

Yes Phil. You are.

And so, in the spirit of all of this, the other day as I was skimming through Netflix looking for something to watch I came across a movie called Spectral.  Maybe a year prior I had passed on bothering to watch it because in my most self-important adult brain voice I had thought “OH GODS THIS LOOKS SO BAD.”

But now, mostly because I was bored I decided to watch it anyway.  And yeah it definitely was NOT great.  But you know what? It also wasn’t the MOST awful either. And as my adult brain rifled through reasons why I needed to hate it, BECAUSE AGENCY OF THE CHARACTERS, a small little voice in the back of my mind spoke up and whispered “Hey Diallo. It’s 1983 you talking.  And guess what buddy, this will blow your mind but, this is exactly the kind of movie you used to love.”

And then the voice went away. And then it came back and said “dang have you been lifting? You look super ripped now.”

“Thanks” I replied.  Then smiled again.

When we bother to come off of our high-minded literary horses and back down from our narrative structure must-have stances, we kind of realize that from a purely body-felt experiential space, bad movies are the backbone of our first world modern existence and the intersection by which we connect with one another. And that is more meaningful that signalling that you’re able to quote Shakespeare sometimes.

As adults we reject this and seek out only content we deem worthy of us. We are more discerning, perhaps because we have more responsibilities and thus less free time, and then as a result we begin to make demands that said thing we are about to engage in triggers in such a way that it produces that same high we had when we saw the first Star Wars.  Yes, that’s right.  You sound like an addict right now Jim. And consider this your intervention.

Don’t Forget From Whence You Came

I would argue that we spend more time in our unguarded day-to-day lives reciting quotes or reliving pop culture things we love, whatever that may be, in a light-hearted humorous context and getting that “I see you” twinkle in the eye that generates kindred spirit sparks for movies that are objectively bad than we do for movies that are objectively great.

For instance, somewhere out there, right now someone is reading this exchange:

…and just has the biggest smile you’ve ever seen.

And don’t get me started on Game of Thrones memes which I currently live for.

The juice and the vibrancy and joy of life lies in bad art sometimes. And we’re not laughing at it, or laughing with it. We’re just being carefree loving authentic creatures about it. It’s Vin Diesel driving cars through 3 buildings in a row in Dubai. It’s watching the Fratellis survive what would have killed lesser men and women in the Goonies, and it is every ridiculous moment anyone outruns Mother Nature like in the last act of The Day After Tomorrow.

I’m not saying you always have to be this, but sometimes, every once in a while, just live a little. If you recognize the contradiction within you then might be just a little less angry and then able to do yourself a favor and just like more stuff and be happy. Be young again, enough to be dazzled and amazed.  I promise, I won’t tell.

And if it makes you feel any better, no matter what I’ve said here, I STILL hate most of LOST and if anyone wants to know why The Dark Knight is a flawed film, I’m here.

Babysteps I guess. Don’t judge me.

Objectively bad films though. Please don’t ever stop existing. Because if they do, then the spark that makes it all worth it will finally be all but gone.